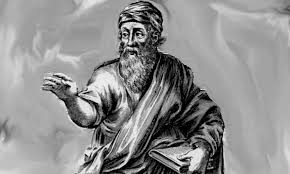 He made significant contributions to astronomy and the theory of music besides the field of mathematics.

His most famous contribution to mathematics is his theorem on right triangles for which he provided the first logical proof. 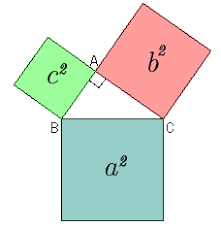 “In a right triangle, the square of the hypotenuse is equal to the sum of the squares of the other two sides.” Pythagoras always insisted on proof. For him, it was not sufficient to just measure two angles and sides and conclude that they were equal or unequal.

Philocrates was to be his first student. Pythagoras had traveled widely to places as far as Miletus, Egypt, and Babylon, and during his travel he had earned a good reputation. With the help of wealthy scholars, he founded a school in Croton, a part of Southern Italy, where a sizable Greek population lived. The students who attended his school were adults who were divided into two groups: acoustici and mathematici. Accoustici were like the first graders who were allowed to only listen to Pythagoras’ lectures but not to see him. Pythagoras stood behind a curtain while delivering lectures where only mathematici or the second graders could see him. Only after three years of attendance, acoustici were promoted to the second grade. Pythagoras solved most of his problems using sand and colors.

Pythagoras gave lessons on mathemata (studies of all kinds) and particularly emphasized arithmetic and geometry. Later, his followers also started a group called select brotherhood or club for the purpose of pursuing the religious and ascetic practices which developed. The group believed in the power of knowledge and shared with one another their ideas while keeping them secret from the masses. There were about 300 members in this club. The group members were vegetarian and especially kind to animals because they believed that human souls might come back after death for a life in an animal form. They would not even wear wool because it came from sheep. The group also chose a path of humility and truth. In this group, there were also women.

Pythagoras and his followers were the first to separate integer numbers into even and odd. They also studied regular geometrical solids having faces having the same shape and dimensions. These solids included the tetrahedron (four faces), the cube (six faces), the octahedron (eight faces), the dodecahedron (twelve faces), and the icosahedron (twenty sides).

Pythagoras’ quest for knowledge and truth continued till his death. Today, when we study geometry and other branches of mathematics, we frequently work with concepts discovered by Pythagoras.